Hillcrest is known for its "tolerance and acceptance," its gender diversity, and numerous locally-owned businesses, including restaurants, cafés, bars, clubs, trendy thrift-stores, and other independent specialty stores. Hillcrest has a high population density compared to many other neighborhoods in San Diego, and it has a large and active lesbian, gay, bisexual and transgender (LGBT) community.

Hillcrest is an older neighborhood which has gone through gentrification. Many streets are lined with trees. There are Craftsman homes and Mid-Century modern apartment buildings.

Hillcrest is part of the Uptown community planning area, which consists of the neighborhoods of Mission Hills, Hillcrest, Bankers Hill, Park West, and University Heights.

Initially, Hillcrest was a chaparral-covered mesa. Kumeyaay Indians inhabited numerous villages scattered throughout the San Diego region. Spanish colonization brought the first of twenty-nine California missions with the founding of the nearby San Diego Mission. Presidio Park in Mission Hills and Old Town just down the hill are a part of San Diego history.

In 1870, Mary Kearney obtained a deed from the city for the land that eventually became Hillcrest. In 1871 Arnold and D. Choate, two real estate developers, obtained that property. George Hill, a wealthy railroad tycoon, then purchased the land. Real estate development began in 1910 and the area was built out by 1920. During the 1920s and 1930s Hillcrest was considered a suburban shopping area for downtown San Diego.

In the 1910s, Hillcrest became one of the many San Diego neighborhoods connected by the Class 1 streetcars and an extensive San Diego public transit system that was spurred by the Panama-California Exposition of 1915 and built by John D. Spreckels. These streetcars became a fixture of this neighborhood until their retirement in 1939.

In 1940 the "HILLCREST" lighted sign at the intersection of University and Fifth Avenue was first erected, donated by the Hillcrest Women's Association, a group of local female shopkeepers. After falling into disrepair, it was taken down and rebuilt in 1984.

After World War II, Hillcrest was left with an aging infrastructure and population.

San Diego Pride is an annual celebration each July for the lesbian, gay, bisexual and transgender (LGBT) community. It features the Pride Parade on a Saturday morning, preceded by the Hillcrest Block Party on Friday night and followed by a two-day festival in Balboa Park. It is sponsored by San Diego LGBT Pride and is considered to be the largest civic event in the city of San Diego. The large rainbow flag approved in May 2012 was erected in time for the 2012 Pride Festival. 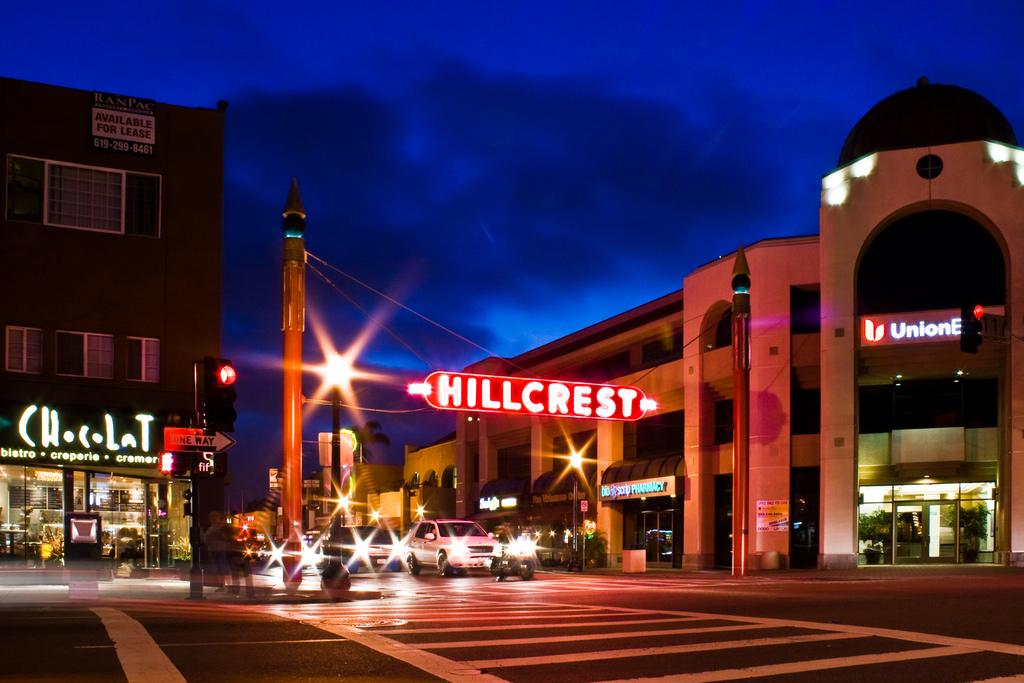