Coronado lies on a geographic combination of an island and a tombolo connected to the mainland called the Silver Strand. Coronado is a tied island, connected by a tombolo. In 2012, Dr. Stephen Leatherman, Director of the Laboratory for Coastal Research, ranked Coronado Beach as the best beach in the United States.

Coronado is Spanish for "the crowned one", and thus it is nicknamed The Crown City. There have been three ships of the United States Navy named after the city, including the USS Coronado (LCS-4). 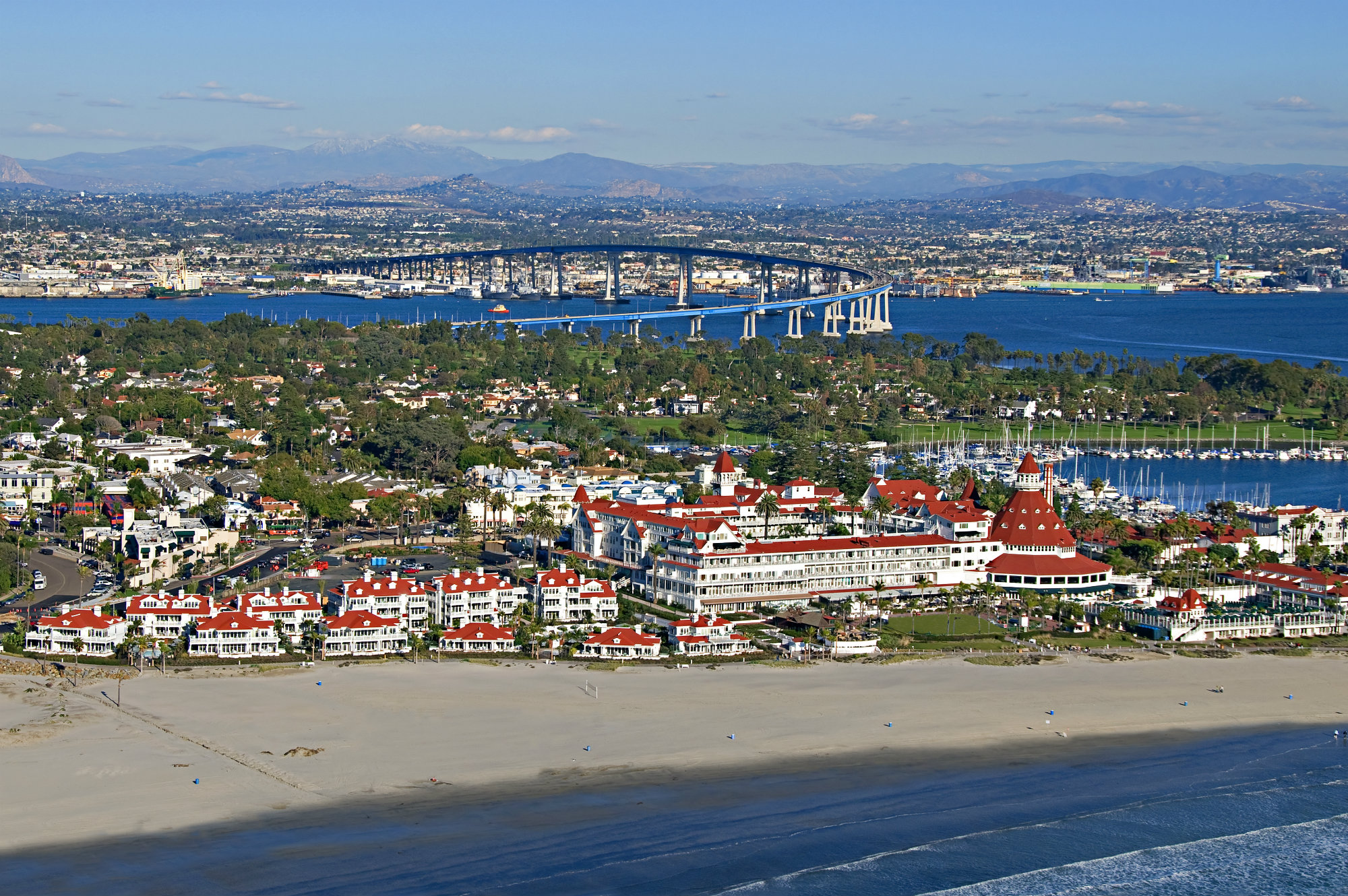 The town of Coronado was founded in 1885. The land was purchased by Elisha Spurr Babcock, along with Hampton L. Story and Jacob Gruendike. Their intention was to create a resort community, and in 1886 the Coronado Beach Company was organized. By 1888 they had built the Hotel del Coronado and the city became a major resort destination. They also built a schoolhouse, and formed athletic, boating, and baseball clubs.

In 1900 a tourist/vacation area just south of the Hotel del Coronado was established by John D. Spreckels and named Tent City. Over the years the tents gave way to cottages, the last of which was torn down in late 1940 or early 1941.

In the 1910s, Coronado was connected to San Diego by the Class 1 streetcars and an extensive, accompanying San Diego public transit system that was spurred by the Panama-California Exposition of 1915 and built by John D. Spreckels. These streetcars became a fixture of the city until their retirement in 1939.

Tourism is an essential component of Coronado's economy. This city is home to three major resorts (Hotel Del Coronado, Coronado Island Marriott and Loews Coronado Bay Resort) as well as several other hotels and inns. The downtown district along Orange Avenue with its many shops, restaurants and theaters is also a key part of the local economy. Many of the restaurants are highly rated and provide a wide variety of cuisine choices.

In 2008, The Travel Channel rated Coronado Beach as the fifth best beach in America.

Coronado is home to two live theatre companies – Lamb's Players Theatre, San Diego's 3rd largest theatre company, and the Coronado Playhouse. The latter being the oldest community theatre in San Diego County. It was first organized as the Coronado Players in February 1946. Both theatres present a variety of performances throughout the year.

Businesses based in Coronado include Benetrends and Cybernetics Leadership Center.

Coronado is home to the famous Hotel del Coronado, built in 1888 and long considered one of the world's top resorts. It is listed as a National Historic Landmark and appeared in films such as Some Like It Hot and The Stunt Man. It was the setting of the Dashboard Confessional song Stolen. The historic hotel has had many notable American guests, including Charles Lindbergh, Thomas Edison, Babe Ruth, Jack Dempsey, Willie Mays, Magic Johnson, and Muhammad Ali. Many presidents have also visited, including William Howard Taft, Franklin D. Roosevelt, Lyndon Johnson, Richard Nixon, Gerald Ford, Jimmy Carter, Ronald Reagan, Bill Clinton, and George H.W. Bush.

"The Del" was supposedly also the inspiration for the Emerald City in The Wizard of Oz. (However, other sources say Oz was inspired by the "White City" of the Chicago World's Fair of 1893.

Author L. Frank Baum would have been able to see the hotel from his front porch overlooking Star Park. Baum designed the crown chandeliers in the hotel's dining room. Because of the reported association with Oz, Coronado is often associated with the color green and is sometimes referred to as "The Emerald City". The colors of Coronado High are green and white; the Coronado city flag is a tricolor of green-white-green with a crown in the middle; and a local surf/skate shop is named Emerald City. The hotel is said to be haunted, with room 3372 being visited by the ghost of Kate Morgan.